Women of the U.S. Senate

So said Dr. Jennifer Lawless, Associate Professor of Government and Director of the Women & Politics Institute at American University in Washington. 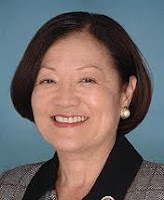 The fact that 16 Democrats and 4 Republicans among the 100 members of the U.S. Senate will be women is due to Tuesday's election news. Voters chose 4 Democratic women – Tammy Baldwin of Wisconsin (middle right), Mazie Hirono of Hawaii (middle left), Heidi Heitkamp of North Dakota (bottom left), and Elizabeth Warren of Massachusetts (top right) – plus 1 Republican woman – Deb Fischer of Nebraska (bottom right). Re-elected was Claire McCaskill, Democrat of Missouri (top left).
The percentage is a "1st"; so too that Baldwin will be the 1st openly gay Senator and Hirono the 1st woman Senator of Asian heritage. And in New Hampshire, voters' choices Tuesday mean that the state will be represented solely by women as Governor and as Members of Congress. Despite these achievements, Lawless sounded a cautionary note:


'"But we have to realize that ... overall, our political institutions are still overwhelmingly male-dominated."'