SOMEWHERE IN THE SKY ABOVE RUSSIA – Recently I traveled to Tokyo to visit my family in Japan. Flying to and from London gave me a full day’s worth of movie-watching time. I brought some DVDs of my own and I asked myself pre-departure:


'Would there be any ‘human rights’ movies to watch on the airplane?'

A few years ago when working for Women’s Link Worldwide, I traveled to New York for a staff board meeting, and had been presently surprised to find the feminist courtroom classic Adam’s Rib (1949) as an option. This flight didn’t disappoint, either. 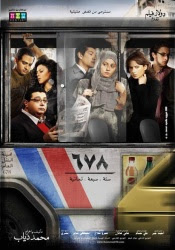 678, a 2010 Egyptian movie directed by Mohamed Diab, is a resounding indictment of patriarchal society and the pervasive culture of sexual harassment in Egypt. The movie, based roughly on a true story, interweaves the lives of three women:
► Nelly, the first woman to officially file a case of sexual harassment;
► A poor woman who begins to use violence to defend herself from ‘the lemon test’ on buses; and
► An educated woman who turns to activism after being sexually harassed at a football game and rejected by her husband.
The film skillfully deals with a range of issues, including maternal mortality, difference within feminism and solutions to combat sexual violence. At times, it left me bitterly angry at what women face, not only in Egyptian society, but in all societies.
In Japan, the metro stations are full of posters warning women about chikan, or groping, and women-only cars are used at rush hour. In countries all over the world, anti-harassment Hollaback! initiatives have begun with women reporting sexual violence on social networks and voicing their anger at some of the names they have been called. As demonstrated by Australian Prime Minister Julia Gillard in a recent speech that IntLawGrrls posted, women face sexism and sexist comments whether they are on the bus, walking down the street, or holding the highest office.
But the film is also uplifting.
Nelly, played by Nahed El Sebaï, refuses to cave into pressure to drop the lawsuit, and the man who harassed her receives 3 years' imprisonment. According to the movie, a year later a law against sexual harassment was enacted, although official reporting remains low.
In the film women are not punished for their bravery, either. Instead, the movie demonstrates how men and women can work together. Nelly’s boyfriend, Omar, supports her against his parents wishes.
The real losers in the story are the men who let their strong and beautiful wives and girlfriends down – either by abandoning them in their time of need or being caught for sexual harassment.
678 is a brave film. It is highly recommended.