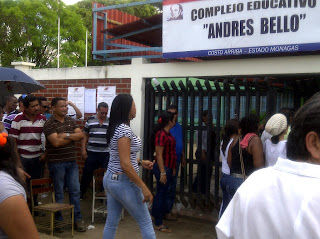 An unprecedented 80.48% of Venezuela’s over 18 million registered voters participated in the presidential elections that took place on October 7 – elections at which, as I posted yesterday, I served as an international observer.
Fifteen years ago in Venezuela, a country with a population of around 27.1 million, only about 13 million voters were registered and eligible to vote. (Photo Credit: Swiss Delegation, CNE Accompañamiento Internacional de las Elecciones del 7 de octubre, 2012, Estado de Monagas, Venezuela)
Dr. Tibisay Lucena, current President of Venezuela's Consejo Nacional Electoral, the election council known as CNE, has engaged in some analysis of the massive shift in levels of participation in her essay, The Venezuelan Experience. Lucena and other members of the CNE, including Vice President Sandra Oblitas, attribute much of the increased participation to the massive investment of the CNE in electoral inclusion in historically disenfranchised urban and rural communities.
Earlier in 2012, before the registration process closed in April, Tamara Pearson of Venezuelanalysis.com reported that


'CNE set up 1,300 registration tents around the country and in overseas consulates, and 1,360,598 people registered to vote for the first time, while 4,512,000 changed their voting address, according to CNE director Sandra Oblitas.'

Pearson reported that 89% of the new registrations were among youth aged 18 to 25; other new registrations included individuals who had since been granted Venezuelan nationality, people who were unable to register due to rural isolation or perhaps a disability, and people who chose not to register prior to 2012. Only individuals with Venezuelan nationality could vote in the October presidential elections; residents can vote in the upcoming December 16 regional elections.
Oblitas has stated that the gap between those able to vote and those registered had been reduced to 3.5%, a statistic she interpreted as a great advance and a direct result of a broader policy of participatory inclusion. The CNE employs over 400,000 people to staff the electoral mesas, provide on the ground digital technology support, and directly administer the electoral process, and maintains an independent budget of over Bs 2,273,000,000 (US$ 494 million) to carry out both the October 7 and upcoming December 16 regional electoral processes.
In contrast, consider that the highest participation rate in recent years in the United States was estimated at only 61.6% of registered voters, comprising only 57.47% of the entire U.S. voting-age population. That was in the 2008 presidential elections.
Amid reports of lower registered-voter turnout this year – an estimated 57.5% – the popular image of the United States as a leader in the development of open, participatory, democratic institutions is not exactly in alignment with current realities on the ground. 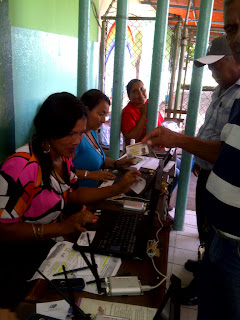 In fact, according to data compiled by the international Institute for Democracy and Electoral Assistance, the United States trails behind 16 Latin American nations in terms of voter turnout, besting only Colombia (45%) and Honduras (53%), two countries that are not well-regarded for any laudable transparency in the electoral process.
The perennial confusion over voter registration in the United States, which may depress registration and participation levels, could be clarified by uniform national standards regarding voter registration. Reforms might take into consideration similar systemic electoral reforms in Latin America.
Along with observations from the Center for Economic and Policy Studies, the National Lawyers Guild International Committee's observations of Venezuelan popular democracy in action – observations in which I took part – stand in marked contrast with media depictions of Venezuela’s government as autocratic.

Indeed, our observations confirmed both the findings of the Carter Center and the commendation of the White House Press Secretary, Jay Carney, who recognized the Obama Administration’s differences with President Hugo Chávez but congratulated the Venezuelan people on the high level of citizen participation in the peaceful presidential election. (credit for photo above: Uruguay Delegation, CNE Accompañamiento Internacional de las Elecciones del 7 de octubre, 2012, Estado de Monagas, Venezuela)
The International Covenant on Civil and Political Rights, signed in New York on December 16, 1966, has been ratified by both Venezuela (on May 10, 1978) and the United States (on June 8, 1992).
The Bolivarian Republic of Venezuela, as established in 1999, expressed no reservations on the domestic applicability of Article 25, the ICCPR's voting provision.
Yet the United States declared provisions of articles 1 through 27 of the Covenant were not “self-executing” under U.S. law. This underscores the work of civil rights groups, such as the NAACP and the Lawyers Committee for Civil Rights, which carefully monitored the 2012 elections to guard against the disenfranchisement of what they estimated to be 5 million to 10 million persons – young, minority, and elderly voters – under Voter ID laws. Such laws have recently been passed, or are pending, in 16 states. 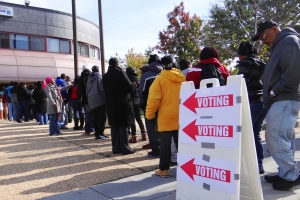 The Brennan Center for Justice at New York University School of Law’s report, Voting Law Changes in 2012, as well as the recent Advancement Project report quoted by the Washington Post, documented the impacts these voter suppression laws may have had on 10 million Latino voters, even given record levels of participation among Latinos this year. (credit OSCE/Thomas Rymer for photo of [eople lining up to vote at a polling station in a police headquarters in the Anacostia area of Washington, D.C., November 6, 2012)
As part of the National Election Protection Coalition, several U.S. NGOs – including the NAACP, the Lawyers’ Committee for Civil Rights, and the ACLU – worked alongside Organization for Security and Co-operation in Europe’s 57 international observers and the U.S. Department of Justice’s 780 federal observers and department personnel, monitoring the U.S. elections in 51 jurisdictions, across 23 states.
But even elections observers faced threats.
Texas Attorney General Greg Abbott warned he would arrest any delegate from the Office for Democratic Institutions and Human Rights of the OSCE who came within 100 feet of Texas polling places.
OSCE observers noted that there were capacity problems at some polling stations, and that the decentralized electoral system in the United States


'continues to lack country-wide standards, creating vulnerabilities in the system.'


(Tomorrow's post: voting access and participation in Venezuela's indigenous and Afrodiasporic communities)
by Joanna Cuevas Ingram at 4:30 AM