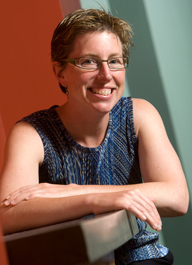 Delighted to announce that IntLawGrrls contributor Elizabeth L. Hillman (left) will be the next Academic Dean of the University of California Hastings College of the Law in San Francisco.
Her appointment as the San Francisco-based law school's top academic officer will take effect on July 1, 2013. Beth will succeed Professor Shauna Marshall, who's served in the post since 2005.
Beth joined Hastings in 2007; before that, she was a law professor at Rutgers-Camden. She's also taught history at the U.S. Air Force Academy and Yale. Beth earned a J.D. and a history Ph.D. from Yale.
As is evident from our prior posts, Beth's an expert on military law. She serves as the President of the National Institute of Military Justice, a nongovernmental organization on whose board yours truly also serves. She's a co-author of Military Justice Cases and Materials (2d ed. 2012) and author of Defending America: Military Culture and the Cold War Court-Martial (2005). Her most recent publication is a review, published at pages 1611-13 of the December 2012 issue of the American Historical Review, of 2 recent books on a current area in which she's conducting research, aerial bombing.
Heartfelt congratulations!
by Diane Marie Amann at 6:00 AM