How to "fix that" United States elections process

In the United States, citizens must continue to advocate vigorously to hold on to landmark historic voting rights protections and inclusionary guarantees.
For example, consider a controversial case soon to be argued before the U.S. Supreme Court. Entitled Shelby County v. Holder, the case, arising out of the U.S. Court of Appeals for the District of Columbia Circuit, represents a challenge to the constitutionality of the preclearance provisions of Section 5 of the Voting Rights Act of 1965 – provisions that require jurisdictions with a documented history of discrimination to obtain approval from the federal government before changing their election procedures.
For over 40 years, the Voting Rights Act has been upheld as constitutional. The Act worked to ensure historically disenfranchised minorities' increased participation in U.S. elections, and was reauthorized in 1970, 1975, 1982, and again, unanimously by a Republican Congress in 2006, during the administration of President George W. Bush.
Now, the most effective civil rights law in U.S. history faces an unprecedented challenge with Shelby County, which puts at stake the constitutionality of the VRA under the Tenth Amendment and Article IV of the U.S. Constitution.
As Corey Dade of NPR has recalled, the preclearance provisions are still quite relevant in 2012, given that federal courts applied the preclearance provisions to block voter identification requirements in Texas, and other procedural electoral changes, ahead of the U.S. general election on November 6.
Similarly, California-Irvine Law Professor Rick Hasen, an election law expert, said :


'There is still evidence of unconstitutional conduct as found this year in the Texas redistricting case ... There certainly is some evidence of continued racial discrimination in voting, although it is far less common than in the 1960s. And when it occurs, it is more subtle. Section 5 has served to be an important bargaining chip.'

Indeed, many voting rights advocates point to the support that U.N. Under-Secretary-General Ralph Bunche provided Dr. Martin Luther King, Jr. and the civil rights movement during the 1960s, which ultimately turned up the pressure on President Lyndon Baines Johnson to sign the Voting Rights Act of 1965. Bunche, winner of the 1950 Nobel Peace Prize  on account of his diplomatic efforts in the Middle East, had participated in the 1963 March on Washington. In a public statement at the Montgomery Statehouse during the 1965 march from Selma to Montgomery, he said that the United Nations supported the civil rights movement in the United States:


'In the UN, we have known from the beginning that secure foundations for peace in the world can be built only upon the principle and practice of equal rights and status for all peoples, respect and dignity for all.' 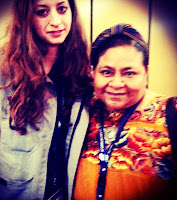 This resonated for me during my October service as an elections observer in Venezuela. While there, as depicted at left, I had the opportunity to meet the 1992 Nobel Peace Prize recipient, Rigoberta Menchú Tum. An indomitable indigenous rights advocate, she too was part of the International Accompaniment that observed voter access and participation. (photo courtesy of CUNY Professor Ron Hayduk) Menchú’s lifework reminded me of why it is so important to stay vigilant in the protection of these civil rights both at home and abroad.
Much work remains to be done.
As I posted in Part 1 of this series, the 2009 Nobel Peace Prizewinner, U.S. President Barack Obama, said of U.S. voting-rights issues during his November 6 victory speech:


'The denial of this sacred right is a tragic betrayal of the highest mandates of our democratic tradition. And so our most urgent request to the president of the United States and every member of Congress is to give us the right to vote.'

The United States is now readying to participate this coming March in the universal periodic review process of the International Covenant on Civil and Political Rights. It seems to me that our most urgent request now is for the Supreme Court to see to it that we keep this sacred right – and for the Department of Justice, the Election Assistance Commission, and Congress to ensure meaningful reforms are passed. Our goals should be an election system that becomes more transparent, accessible, accountable, participatory, universal and open to all.

by Joanna Cuevas Ingram at 4:30 AM