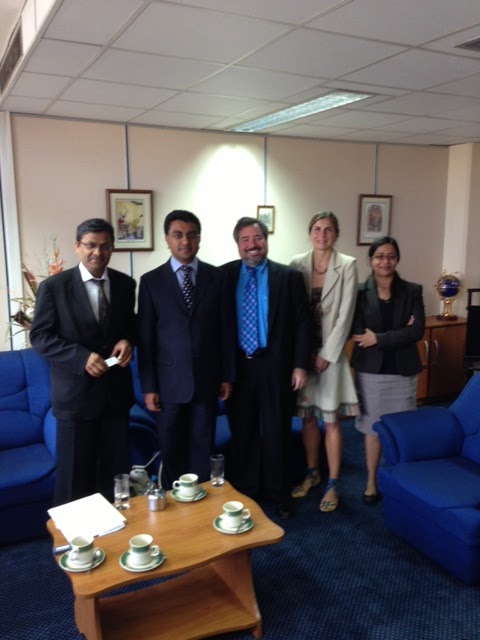 Greetings from Mauritius, a small island nation in the south of the Indian Ocean, where Professor Michael Scharf and I have traveled to meet with various government officials regarding Somali piracy issues (pictured left).
Mauritius is about to start prosecuting Somali pirates in its national courts, pursuant to transfer agreements which it has signed with the United Kingdom and the European Union. Under the terms of these agreements, alleged Somali pirates detained by maritime fleets of the United Kingdom or countries in the European Union can be transferred to Mauritius, where they can be prosecuted in Mauritian courts under Mauritian law.
Kenya and the Seychelles have similar transfer agreements in place and have successful prosecuted dozens of Somali pirates. Mauritius joined this “club” of piracy-prosecuting nations earlier this year, and although no actual transfers of suspected pirates have actually taken place as of today, many in the international community are eagerly awaiting the start of prosecutions in this new venue.
Professor Scharf and I have previously engaged in various projects related to Somali piracy about which I have previously posted. The visit to Mauritius is a continuation of these projects: we are here both as representatives of the Piracy Working Group, an expert group within the auspices of the Public International Law and Policy Group, a Washington D.C.-based NGO, and as independent academics and representatives of our respective institutions, Case Western Law School and the Cleveland-Marshall College of Law.
One of our goals is to advise the Mauritian government on best strategies regarding various aspects of piracy prosecutions. Toward that end, we delivered a presentation at the Deputy of Public Prosecutions’ office, to an audience consisting of prosecutors, judges, practicing attorneys, and other government officials, on the issue of juvenile pirates. It was our recommendation that Mauritius should not shy away from prosecuting juvenile pirates, but that instead, it should put in place an appropriate mechanism under which juveniles can be prosecuted in separate proceedings, detained separately from the adult prison population, and accorded educational opportunities in order to properly rehabilitate them. It was also our recommendation that those who recruit juvenile pirates should be treated more harshly, and that the recruitment and use of juvenile pirates should be an aggravating factor in sentencing.
Another goal in Mauritius is to establish a working relationship with the prosecutor’s office, whereby Mauritian prosecutors will be able to commission legal memoranda on challenging legal issues which may arise in connection with future piracy prosecutions from the Piracy Working Group. Various members of the Piracy Working Group, including Professor Scharf’s and my own students at our law schools, have already produced such memoranda for the Kenyan and Seychellois prosecutors. It is our hope that in the future members of the Piracy Working Group will be able to assist Mauritian prosecutors in a similar manner.
We anticipate that Mauritian prosecutors will face very difficult legal issues once they open their courtroom doors to Somali pirates. Some such issues, in addition to the treatment of juvenile pirates mentioned above, include the possibility of expanding jurisdiction to cover preparatory acts falling short of traditional notions of piracy, the question of whether the prosecuting forum should be divested of jurisdiction if the detained suspected pirates were mistreated by the arresting nation, whether Mauritius can use any extradition treaties in addition to its existing transfer agreements to acquire jurisdiction over suspected pirates, the issue of respecting the suspected pirates’ right to a speedy trial, as well as the question of long-term incarceration for any convicted pirates and whether Mauritian prisons have the adequate capacity if pirates are to serve lengthy sentences in Mauritius.
Our other meetings over the next few days in Mauritius include a visit at the U.S. Embassy in Port Louis, the capital city, a working session with the Attorney General, a visit to the University of Mauritius Law School, as well as a conversation with the Mauritian police forces, whose role may prove to be of vast importance once Mauritian authorities began to handle detained pirates. I will be happy to report on these future meetings upon my return home.
by Milena Sterio at 9:00 AM