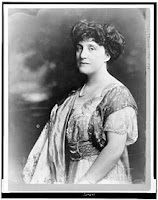 'I hate with a murderous hatred those men who, having lived their youth, would send into war other youth, not lived, unfulfilled, to fight and die for them; the pride and cowardice of those old men, making their wars that boys must die.'

–  Quote attributed to one Mary Roberts Rinehart (right), at, of all places, as a tag line of a page on a what-does-this-word-mean website. Further digging found that Rinehart, a Pennsylvania-born author who lived from 1876 to 1958, was so well known as a mystery writer that some called her "the American Agatha Christie." Among Rinehart's contributions to popular culture? A character that inspired another writer to create Batman, as well as a catchphrase venerated in mystery lore: