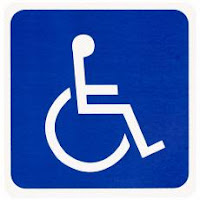 'Then, after Mr. Dole’s wife, Elizabeth, rolled him off the floor, Republicans quietly voted down the treaty that the ailing Mr. Dole, recently released from Walter Reed National Military Medical Center, so longed to see passed.'

–  New York Times reporter Jennifer Steinhauer, in an article on yesterday's vote on Capitol Hill: falling 5 votes short of the need 2/3 majority, the Senate rejected U.S. ratification of the Convention on the Rights of Persons with Disabilities, notwithstanding a from-his-wheelchair plea by 89-year-old Bob Dole, formerly the Senate's majority leader and a Republican candidate for President. The 2006 treaty, which entered into force in 2008, has 155 states parties. By yesterday's vote the United States – though it signed the treaty in July 2009, as Hope Lewis then posted – remains a nonparty state.
by Diane Marie Amann at 11:20 AM