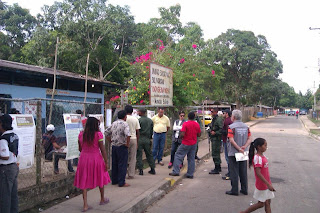 October 7, the general Election Day in Venezuela, falls on a Sunday. That day, in my capacity as an international election accompañamiento, or "accompaniment," I traveled to many sites in Venezuela. Specifically, I visited eleven precincts across the eastern state of Monagas, along with two domestic observers, a Swiss human rights advocate, a Brazilian professor of international law, and two journalists from Chile and Uruguay.
When we arrived at the remote indigenous Warao community of Mosú at 8:40 in the morning, we observed that 60% of the people in the community had already exercised their right to vote. 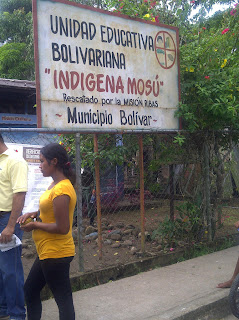 Our delegation spoke with Santo Garcia, the elected administrator of the indigenous school in the town of Mosú. Garcia stated:


'Every person who wants to exercise their vote has been able to do so…. As it says in the Constitution approved in 1999, every indigenous community needs to elect their representatives.'

No outsiders – other than the staff of Consejo Nacional Electoral, also known as the National Electoral Council or CNE, as well as officials, observers, and international accompaniers – were allowed to enter the community, under the local regulations regarding indigenous autonomy.
CNE is an independent, fourth branch of government. It derives from the power of the people as set forth in Articles 136 and 296 of the 1999 Venezuelan Constitution, and works affirmatively to create spaces for indigenous and afrodiasporic minority voters to exercise the franchise. (credit for photo by Uruguay Delegation, CNE Accompañamiento Internacional de las Elecciones del 7 de octubre, 2012, Comunidad Indigena Mosú, Caripito, Bolívar, Estado de Monagas, Venezuela)


'In creating new electoral centers in remote communities that historically had been forgotten as afrodescendent and low-income communities, the initiatives of the Consejo Nacional Electoral (CNE) create a system that prioritizes security and confidence in the voters, as a massive investment in the education and formation of voters who respect the procedures to exercise the right to vote. This investment has clearly had a return, and a significant impact on reducing the numbers of abstentions and null votes. In a highly politicized and polarized society such as Venezuelan society, in which the population has become a part of the political process every day – this has become an evolving process in the participatory and active exercise of one’s citizenship.
'As a result, there has been a major consolidation of spaces for debate in a society in which diverse opinions and thoughts were formerly silenced; now afrodescendent men and women have the opportunity to express themselves and reflect on their own situation and experiences, specifically those which have resulted in the massive formulation of policy proposals and projects by and for diverse afrodescendent groups and communities.'

In my view, as an observer this autumn of both the U.S. and the Venezuelan elections, the clarity of the national standards, technical audits and accountability measures built into Venezuela’s electoral process stand in stark contrast to the lack of transparency and struggles with voter ID requirements and other forms of suppression in the United States.

CNE Director Socorro Hernández, herself elected by the Faculty of Law and Political Sciences from Venezuela's National Universities, has reflected on the ownership that citizens in Venezuela maintain by participating directly in the auditing process through the “citizen's audit,” or citizen vote verification process. After voting anonymously on the electronic machines, citizens also receive a paper receipt which is then placed in a ballot box.
Once the elections have closed, the receipts are required by law to be counted by hand by members of the local electoral mesas, witnessed by at least one representative from two opposing political parties, open to the public, and compared to the electronic results in 54% of the polling stations nationwide. This is a mandatory post-election procedure, required by Venezuela’s 2009 Organic Law of Electoral Processes. By the end of this October, over 99.89% or 15,160,289 out of 15,176,253 votes, were scrutinized, and successfully passed the post-election vote verification and audit process.
The number and location of voting centers, professionalism of electoral officials, accuracy of digital and manual vote calculation, as well as the success of the citizen vote verification process also known as the “citizen's audit,” provide clear examples of progress on access and participation in Venezuela’s electoral process and offer some food for thought as we continue to pursue our right to a universal, secret, and direct voting process here in the United States.

(Tomorrow's post: Thoughts on how to "fix that" process of elections in the United States)
by Joanna Cuevas Ingram at 6:00 AM