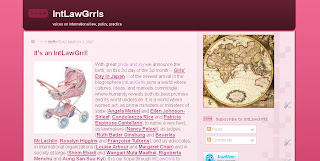 Following a blissfully brief gestation, IntLawGrrls: voices on international law, policy, and practice was born on the 3d day of the 3d month – Girls' Day in Japan – of the year 2007.
We entered a world that was – and is – a jumble of peoples, a mix of culture and custom, a marketplace of markets as well as ideas. A world where peoples come together in amazing ways, yet clash in ways that bring destruction and dismay.
Women have a hand in our world’s affairs, we wrote then. That is even more so now. To names prominent in 2007, add others.
► Joan Donoghue, Julia Sebutinde, and Xue Hanqin, all judges on the International Court of Justice. Elena Kagan and Sonia Sotomayor, who joined Ruth Bader Ginsburg on the U.S. Supreme Court. 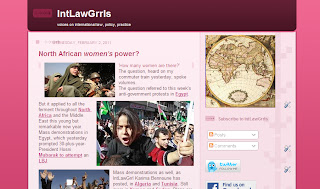 ► Nobel Peace Laureates Ellen Johnson Sirleaf, Leymah Gbowee, and Tawakkol Karman, and their countless unnamed colleagues.
► Hillary Rodham Clinton, U.S. Secretary of State. A host of new heads of government.
► And Fatou Bensouda, an IntLawGrrls contributor, who will become chief Prosecutor of the International Criminal Court at midyear.
Yet now, as then, our voices remain faint, in backrooms, in public forums, and in the blogosphere.Written by women who teach and work in international law, policy, and practice, IntLawGrrls was founded to try to change all that. Our success is reflected in the photos below.
To date, more than 300 of us – law students, professors of law and other disciplines, practitioners, advocates, and judges – have endeavored to provide crisp commentary, delivered at times with a pinch of pink and a dash of sass, and so to encourage fresh dialogue on the matters of the day. Edited by IntLawGrrls Diane Marie Amann, Kathleen A. Doty, and Jaya Ramji-Nogales, we've covered events on many continents. We've hosted 4 conferences. And we've published 11 International Criminal Law Review 365-662 (2011), a special issue on "Women and International Criminal Law" dedicated to Judge Patricia M. Wald, an IntLawGrrls contributor.
We look forward to more of the same.
It's our world, after all.